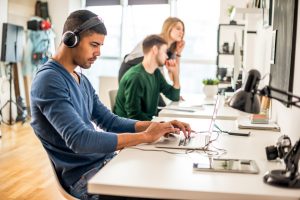 How to implement effective acoustic design with terminal units

As anyone wearing headphones at the office to keep coworkers from bothering them can tell you, noise is an issue in public spaces. While the primary focus of HVAC systems is temperature and humidity control, experienced designers know that controlling sound is vital to a comfortable and productive environment.

Total peace and quiet may sound relaxing, but actually isn’t ideal. Acoustic privacy is a state where someone at their desk can hear nearby conversations, but not enough to be distracted by them. Good acoustical design is not about trying to eliminate sound, but rather manage it appropriately. Too quiet and you destroy acoustic privacy. Too loud and you interfere with speech or even cause hearing damage. You also don’t want any annoying rumbles, hisses, identifiable machinery sounds, or undue modulation of the system cycling off and on over time.

Good design practice requires mechanical system designers to establish the acceptable noise for an occupied space and then determine the selection criteria for all system components. AHRI Standard 885, Procedure for Estimating Occupied Space Sound Levels in the Application of Air Terminal and Air Outlets, provides a consistent method and the most current application factors. This article won’t cover the calculations involved, but rather focuses on underlying factors and actionable recommendations.

The key approach to noise control breaks each issue into three overall components: the source that creates the noise, the paths that transmit the noise, and the receiver who hears the noise. Air terminals are often a primary source of sound in a mechanical system. The path for sound emanating from an air terminal is either through the plenum, down the duct into the conditioned space where it reaches the occupant, or some combination of both.

Once the radiated and discharge sound paths are determined, the resulting room sound level can be evaluated. Several factors outside the mechanical system play a part, including the dimensions of the room, carpet and furniture, just to name a few. An accurate analysis is a complex process, and as a reminder, AHRI Standard 885 provides a consistent method for accomplishing it.
Engineers can minimize the sound contribution of air terminals to an occupied space with the following good design practices:

While it is crucial for designers to understand acoustical ratings in order to write good specifications, the careful selection and proper installation of every element of the entire system are required to ensure an optimal environment. Using the best products for the job will save you time, money and headaches in the long run.